Reggae fans' never ending obsession with the ultra-fascinating and ultra-active Vaughn Benjamin and Midnite has been enjoying a mighty strong stretch as of late with two albums already on shelves for 2010, 'Ark A Law' and 'What Makes A King'. Always known as being one of the most active artists on the scene, Benjamin and company return to familiar ground with their third effort of the first half of the year, Fifth Son Records, who brings forth 'Momentum'. 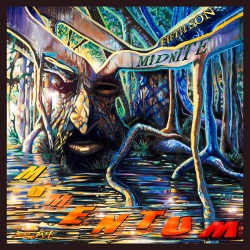 Previously the New Mexico based label released the well received 'Suns of Atom' as well as the double disc set, 'Standing Ground'.

'Momentum' is an album on which listeners can expect more of the typical cryptic genius which normally accompanies Midnite projects. The difference here, as is the norm with Fifth Son, is that the music is very beautiful and vibrant and they really give Benjamin, one of the greatest lyricist of the day, very strong backgrounds over which to display his unrivaled messages.

Midnite's fans are known as being some of the most devoted and determined in Reggae and they'll most certainly be eager to pick up 'Momentum' from Fifth Son Records, which they can do right now both on CD and through digital retailers.