The festival will take place in Sweden from 5th to 7th August 2010. 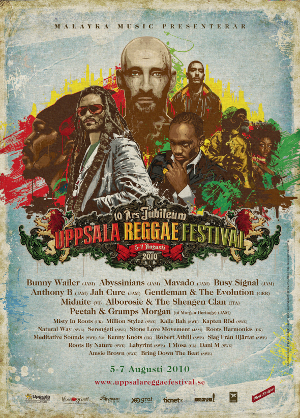 Sweden’s leading reggae festival this year offers the opportunity to see international artists including Bunny Wailer, the Abyssinians, Busy Signal, Peetah and Gramps Morgan (as in Morgan Heritage), Jah Cure, Misty in Roots, Natural Way, SKAnsen and many others: for details of the programme, more information about the performers and ticket information see the English/Swedish language site.

Running from 5th to 7th August 2010, the Uppsala Reggae festival first took place 25 years ago, and has over the years developed into a full-blown three-day event, firmly established as the leading northern European reggae gathering. The music on offer this year includes both classic and contemporary reggae. Bunny Wailer, original member of the Wailers alongside Bob Marley and Peter Tosh, is scheduled to play on the opening day. So too are the venerable Abyssinians, who have been playing since the late 1960s, initially working alongside producer Clement “Coxsone” Dodd before going their own way in the 1970s. The band reformed with their original lineup in 1998. Misty in Roots are associated in many people’s minds with the UK’s Rock Against Racism movement of the late 70s, with themes of conflict and urban dislocation in a musical moment that brought together rock, punk and reggae. Busy Signal (Reanno Gordon) from St Ann, Jamaica, represents a more contemporary dancehall feel, his second studio album in 2008 gaining wide attention. His album 'DOB' is released July 2010 with a gentler sort of dancehall sound.