St Lucian singer Taj Weekes is about to release his third album : 'A Waterlogged Soul Kitchen'. 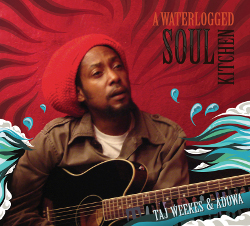 Two years after the acclaimed Deidem, roots singer Taj Weekes and his band Adowa are back with a third album. 'A Waterlogged Soul Kitchen' will be available on August 10’’ on Weekes’ label Jatta Records.

According to the press release, Weekes and his band blend their original modern roots reggae with acoustic guitars, cellos and violins, "in order to go in a little different direction, give flavor to the music and bring in some other vibes", said Taj Weekes. The 11 track album features the debut single Rain Rain : a tough song about Hurricane Katrina and the lack of effective action for the residents of the devasted states in August 2005.