The long awaited return of a pillar of Reggae music.

Earlier this year a couple of Dutch labels, Jahsolidrock and Not Easy At All made their presence known to all who had yet to hear their names when the two imprints linked up to release clearly one of the year's best releases, 'Judgement Time' by Chezidek. That release certainly set the stage and anticipation very high for what they would do next and what they've come up with as an 'encore' will more than suffice as they now offer the very first solo album release from the venerable Apple Gabriel in over a decade, 'Teach Them Right'. 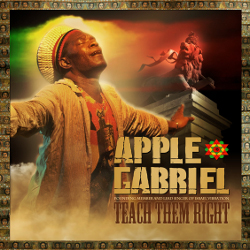 Well known for having previously fronted one of the most respected and powerful entities in the history of Reggae music, Israel Vibration, the case could be made that despite having been on his own as an artist for quite some time now, Apple Gabriel has yet to truly tap into his potential as a solo artist. If such a thing can be done then definitely this album is going to give it its greatest attempt, as it features Gabriel over some heavy Roots compositions which are certain to thrill new and old fans of teh genre alike. Also, just as on their first link, Jahsolidrock and Not Easy At All offer instrumentals for almost every tune on the album.

If you haven't noticed, this is a pretty big deal and fans worldwide can see and hear exactly how big when Apple Gabriel's 'Teach Them Right' reaches stories digitally and physically on November 15.

Tags: Apple Gabriel, JahSolidRock, Not Easy At All, Israel Vibration