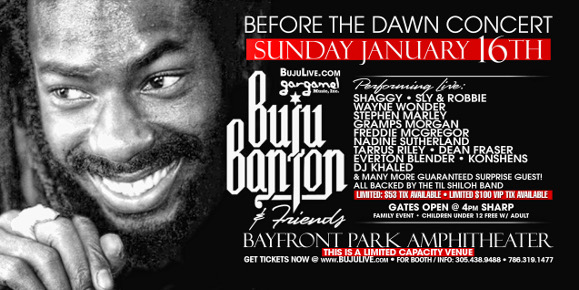 Buju Banton has been granted  permission to perform at a concert entitled “Before the Dawn” set for January 16, 2011 at Bayfront Park Ampitheater in downtown  Miami, Florida.

Produced by Rocker’s Island Entertainment who also brings us the Best of the Best Concert, Buju fans will be coming from all parts of the globe!

The veteran Reggae artist, who has been incarcerated in Northern Florida for 11 months, has not performed live in over a year. His Grammy nomination for his prophetic new album “Before the Dawn,” and this timely event will definately be history in the making!

Buju Banton rises to this historical event which will not happen anywhere else in the USA.  He will be joined by a list of performers from top Dancehall, Reggae, Hip Hop and R&B just announced!

Billed as a family affair, doors open at 4:00PM and the show starts at 5:00PM SHARP and ends promptly at 10:00PM. Children under 12 will be admitted free with an adult. Details at http://www.bujulive.com/