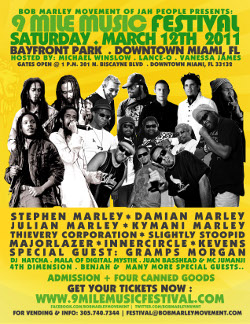 Every year the Festival collects canned food and donates it to a needy organization. Since the inception of the Festival over two million can of food has been collected! This humanitarian effort helps spread Bob Marley’s message of peace, love and unity.

The Festival is one of the most successful musical events throughout South Florida. It is an event that entices people from around the United States, Canada and the Caribbean to attend.

Advance General Admission tickets are $55.00 (plus four cans of food) and are available at www.bobmarleymovement.com and other Caribbean outlets.

General Admission tickets start at 63.00, plus four cans of food.

Special VIP tickets are available for $183.00. This includes a special viewing area, food, drink and a commemorative t-shirt.