The Kingston Connexion label out of Dijon, France, has released Peace Love and Harmony, another rare 7”. 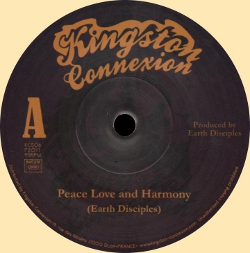 It’s a sufferer’s lament by the harmony group Earth Disciples, originally issued in 1979 on Tuff Gong’s 56 Hope Road label, which aside from its Bob Marley connection, released collectors deep roots items such as Reggae George’s Three Wicked Men and the poet Oku Onuora’s Reflections In Red.

If you want this 45 it is only available from one source, Jamaican Roots who presumably have an exclusivity deal with Kingston Connexion: http://www.jamaican-roots.com.