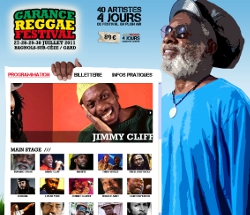 Last month we reported on the line up for this years Garance Reggae Festival taking place in Bagnols-sur-Cèze, France between the 27th and 30th of July and as promised the promoters have now announced the names of some further acts that have been added to the bill.

These are on the main stage Lutan Fyah, Johnny Clarke, Horace Andy, Clinton Fearon and Twinkle Brothers while in dub station corner South East London's Jah Shaka will be bringing his roots reggae sound system to the preccedings.

With artists such as Burning Spear, Jimmy Cliff and a Studio One revue that features many of its past recording stars confirmed to appear the line up at this festival continues to impress and it is believed another thirteen artists will be named soon.