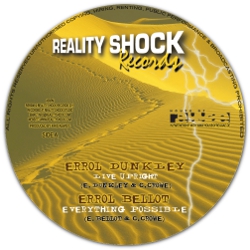 UK-based label Reality Shock has teamed up with German news site House of Reggae. Together they have put out a limited edition 10” featuring vocal cuts by Jamaican foundation singer Errol Dunkley, UK veteran Errol Bellot and Solo Banton, who dropped his anticipated debut album 'Walk Like Rasta' on Reality Shock little over a year ago.

Check it while it is hot in a record store near you.