The latest DVD of the cult series is coming soon. 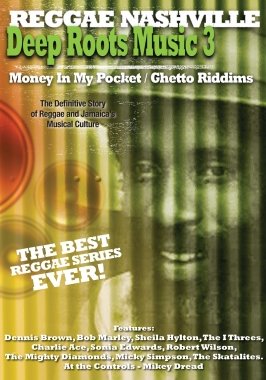 While the second opus containing episodes 3 and 4 (Bunny Lee Story and Black Ark) is expected to be available in the coming days, the latest DVD of the cult Deep Roots Music series is scheduled for the 15th of April.

Money In My Pocket features the prince of reggae Dennis Brown and analyzes the connection in Jamaica between politics, commerce and music. Clips include Edward Seaga and Michael Manley united on stage by Bob Marley at the famous reconciliation concert during the bitter and violent 1981 election campaign. Also explores the music on the radio (Sonia Edwards, Robert Wilson), music in the streets (Charlie Ace's Swing-a-Ling music van) and music in the studio (Sheila Hylton, Dennis Brown). [Source: MVD Visual]

Ghetto Riddims is an incredible showcase of street-corner talent, a musician on every corner. It explores the island's poor and the huge contribution of the ghetto to Jamaican musical culture. It shows Charlie Ace bringing the music to the people, and Jack Ruby's street-corner audition sessions attracting formidable original lyrics and compositions from unknown artists. Featuring the Skatalites, The Mighty Diamonds and Micky Simpson. [Source: MVD Visual]