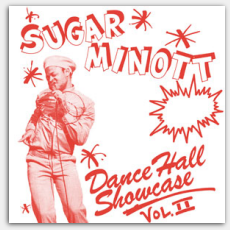 Reissue of Sugar Minott's classic Dancehall Showcase Vol. II originally released in 1983 on Sugar Minott' Black Roots label. This showcase set including 4 songs and their dubs as famous Informer and mellow Genuine Lover will be available as 10'' and on CD on February 29, 2008.

The CD will also feature two bonus tracks, Jah Batta’ Informer and Little John’ Tear Down The Dancehall also reissued in January 2008 as 12’’, as we announced it. A reissue specially dedicated to all dancehall fans, as it says on the label !