Life Over Death by Anthony B

Life Over Death by Anthony B

Anthony B announces the release of his new album Life Over Death on limited source digital download only. 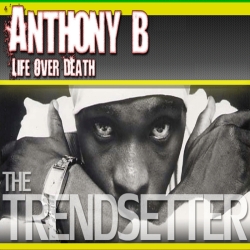 Anthony B has announced via his myspace that he is releasing a new album Life Over Death exclusively via digital format on the 5th May. The album will only be available to download at www.anthonyblifeoverdeath.com, www.MusicGiants.com and iTunes. In a statement describing him as “The Trendsetter” he promises that his new album “breaks new ground as Anthony shows his versatility with a phenomenal mix of tracks that reflects his evolution as a trend setter in the music industry!”

“The title track “Life Over Death” captures Anthony’s vision of his struggles in life and his ability to overcome all obstacles. The song “Territory, Remix” is a powerful anthem calling all to stand for their community, and “The Beast” speaks to his experiences within the music community and the trials that came along with his success."

“The album’s first digital single “Bad From Long Time” coins Anthony B “The Trendsetter”. A new road is being forged as Anthony B blazes a trail in uncharted territory for the reggae industry within the realm of the digital revolution. Bornfire Music has partnered with Zojak World Wide, and Music Giants to independently release “Life Over Death” at anthonyblifeoverdeath.com, and MusicGiants.com. The album will be available for download Monday the 5th of May. Join “The Trendsetter” in the digital revolution by supporting his work at anthonyblifeoverdeath.com and MusicGiants.com - your source for HD downloads!”

Anthony B is following the footsteps of non reggae artists such as the rock group Radiohead and the novelist Stephen King in choosing a digital only release for his music over traditional methods. This venture marks the latest chapter in reggae’s efforts to adapt to a changing industry, and we wish him every success.