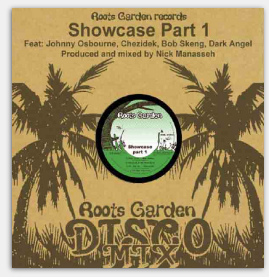 17 years after the killer Education, his first recording with UK based producer Manasseh on RIZ records, Bob Skeng returns with the spiritual The Lion over a fresh rootsy riddim. Then, comes the singjay Chezidek hailing from St. Ann, JA, who delivers soulful and conscious vocals with On The Go over a Manasseh one drop style instumental. Side B features London based singjay Dark Angel delivering a hit tune, with the militant Free Da Minds, over a digital dancehall riddim reminding the good 80’s. Finally, comes Manasseh’s remix of Johnny Osbourne’s wicked Blackstarliner originally released on 7’ in 2005 on Roots Garden label.

This new release in a showcase style features four strong tunes with their dub versions. Available on 12'’ and soon for download from online stores. Looking forward to hear the Part 2 !