Zion Train’s Deep Root label has released a new 10’ featuring Abassi All Stars showcasing upcoming singers, while its sister imprint Universal Egg presents their second remix EP from the 2007 Live As One album. The Deep Root 10’ is the second 2008 release for Abassi All Stars musicians collective. It features Rise Up, a conscious vocal cut by Prince David, an up-and-coming singer out of the Italian Moa Anbessa stable, followed by German female singer Lua delivering her Message Of Hope. Side B starts with Nucleus Roots crew’s Brother Moses’ Question followed by the dubwise version from Abassi All Stars. Four conscious and serious UK style dub cuts.

The Universal Egg release features remixes from the Live As One album. Professor Skank has remixed the vocal and dub cuts of YT’s Life That I Choose resulting in some heavy tunes. Next up is German Dubstep producer Wadadda’s interpretation of Boxes and Amps feat Dubdadda, followed by Weeding Dub’s strong dub stepper version of Baby Father. As usual with Zion Train, these are limited edition releases. Miss them at your peril! 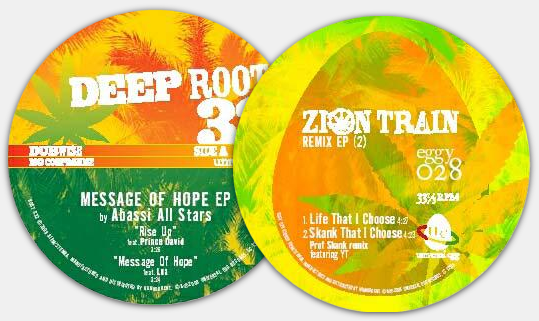